Is this a good electrical ground (near battery)?

Joined 16 d ago
·
8 Posts
Yes, that is a body ground. But, if you want to be sure, do a voltage drop test after you are done with your light installation. Place your multi-meter in the DC volts setting, turn on your LED light, and place one lead on the body ground bolt and the other on the battery negative post. You should have a reading of near 0 volts. If you have any appreciable voltage, your ground is not a good, and you will need to clean it up a bit, (make sure there is not paint or corrosion). Good luck!

Joined Feb 28, 2019
·
3,011 Posts
Yes, that's a good ground.
While you are at it, maybe clean up that hot battery terminal tap, get a fuse in the circuit and secure the line.
If you'll be adding more stuff, consider a remote fused bus block. Then you only need one lead off the positive terminal, and everything stays neat. Something like this: 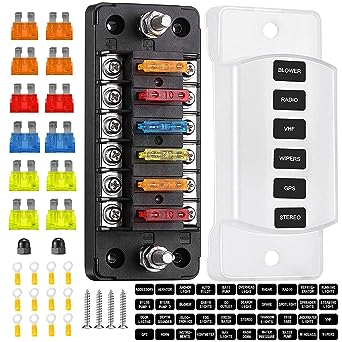 RamTest said:
Yes, that's a good ground.
While you are at it, maybe clean up that hot battery terminal tap,
Click to expand...

Haha....yeah,...sorry, that picture makes it look like there is some messy wiring on the + terminal, but that is actually the wiring for the LED lights sitting on top temporarily. I just moved them out of the way after running them up there to take the picture of the ground screw location. Thanks for the link...I will be doing something similar, but by using Powerpoles (as I have a bunch of them kicking around from HAM radio stuff). Going to take one main run from the + terminal using a large Anderson Power, and then split that into 3 smaller Powerpole connectors (pigtailed), each fused. Will be doing the same with the ground connector as well.
R

Joined Feb 28, 2019
·
3,011 Posts
YEG, don't forget to post some pics when that wiring is complete. The folks around here get downright giddy when they see pics of unique quality modifications. Thx.
Y

2019 Pro-4X (30,000km)
Joined Aug 30, 2019
·
351 Posts
Well...finished product (I hope) unless some sees something that should be changed out. Overall, I just did it this way as I already had Anderson connectors around so just using existing stuff instead of new purchased items.

The bonus with Anderson connectors here is that everything is very easily disconnected, and I could even temporarily (but securely) connect other devices (HAM radio, CD radio, high power air compressor, inverters etc). Basically makes a direct battery connection very available. I tend to replace the connectors on my DC accessories with Anderson connectors or have a converter for common ones in the truck already. A lot more secure than using the clamp ones.

So, here is the battery connection, + terminal through a 40A inline fuse (it just happened to be what I had around...too large but should still protect in a short condition) to an Anderson Powerpole (red). Also have the body ground connected to the mated connector (black). I gave the body screw location a light sanding to bare metal and after tightening it all down gave it all a good coating of dialectic grease. I'll keep a close eye for corrosion.


The main Powerpole then pigtails out to smaller powerpole connectors. Again, I just happened to split into 2, but I could add more easily as needed in any gauge wire. I don't need to connect much more so 2 should hold me.


And here is my LED light connected to one of the pigtails. I could not find another black Anderson connector in all my junk so I used a green one. Bugs my OCD mind, but when I dig out my HAM radio box, I will swap in a black. Just wanted to get it done on a rare nice day here.

You cannot see it in the pictures, but the LED lights also have their own 5A inline fuse as well (downstream of the green Andrerson connector). The 40A is just to protect the overall line.