Joined 13 d ago
·
3 Posts
Hey I'm new to all this and I have a 2002 supercharged frontier and I love the look of it so much but I wish it had as good of hp as the 2005 and up ones. I dont think people really try to get hp out of these trucks and I dont want a ton but it would be nice to at least match some newer midsized pickups. Are there any upgrades or mods that would be good and how much hp will they give me?
S

Joined 11 mo ago
·
197 Posts
I followed this by curiosity, but sadly the VG33 engine was not a performance engine. The KA24 was in the 240sx so there is a ton of mod you can do. I believe there is some cams from the 300zx that fit the VG33. I don't know if they are recommanded for the S/C engine.

Was it worth it:

Hope it help you a bit
M

Joined Jun 6, 2015
·
144 Posts
210 hp. Check your codes and make sure you don't have a bad knock sensor. Common problem and it will drop boost to nothing. You can put on a smaller pulley, headers, cold air intake, exhaust, and possibly cams. With the smaller pulley, they run pretty good. My 4x4 with 32"s and a 2.3" pulley and cold air intake is pretty good on power. It's no V8 though.

Joined Apr 5, 2014
·
660 Posts
Get a smaller pulley or just get a Boost Controller that you can manually bump the boost up to like 8-12 psi. The factory setup is set to dump boost at like 4psi i believe but maybe its 8.Get A Boost Gauge And You Find Out Exactly What Your Setup is Putting Out. You get 230hp out of the VG33E just by doing that.

Add Some Cams like these from Jim Wolf and get another 10-15 HP. With A SuperCharger set to run with higher boost than factory, Cams, and Get some Headers, you could very well get 250 Horse Power.
Upgrading your exhaust manifold to the 2003-2004's will give youg an extra 10 HP . 99-02 the VG33E cranked out 170 HP. The 03-04 Frontiers and Xterra with the VG33E put out 180 and it was all because of the Exhaust Manifold that got upgraded. The 03-04 SC models did not get the larger Exhaust Manifolds for some reason. Regular VG Manifolds from 03-04 Models will fit your truck or any Frontier/Xterra with a VG33

Do All Of The Above And You'll Get 250 Horse Power


Like I said earlier. The SC has a waste gate thats set to dump at a low psi. Just throw a Manual Boost Controller in the mix and you can set it up to dump at a higher psi which in turn will give you more Horsepower. I'm not talking about anything crazy here but just bumping your boost up a little bit. You can get a manual one for like $10 Bucks. You just set it up, put it under the hood and forget about it.
BOOST CONTROLLER 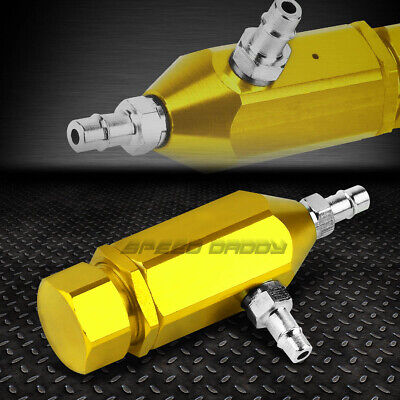 The screw can be turned out to varying degrees to allow air to bleed out of the system, relieving pressure on the wastegate actuator, thus increasing boost levels. Ball & Spring Closed Loop Design. CNC Machined Aluminum Body.
www.ebay.com

Get You One Of These Gauge Pillar Pods Custom Fit For Our Trucks. Put a Boost Gauge and an Oil Pressure Gauge In It.
Or if you dont like that idea then just get a Boost Gauge to dial in your boost for your manual boost controller, get it setup the way you want, then disconnect.
Set It And Forget It. 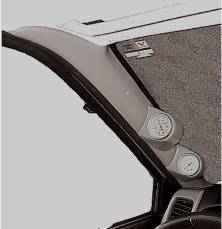 Joined Mar 21, 2016
·
2,830 Posts
There is no wastegate on a VG33ER. There is a boost valve with a boost control solenoid that gets cut when the knock sensor is triggered. Wastegates are used on turbocharged engines, but usually not on supercharged engines. If you go with a smaller supercharger pulley, it will increase the boost pressure. Stock is 2.6". The 2.3" is the smallest available, but it can rev the supercharger over it's recommended RPM limit (which I believe is 14,000 RPM, if my memory is correct), so 2.4" is a safer way to go. You will likely have to go one step colder on the spark plugs if you go with the smaller pulley (i.e. NGK # 92400 (Ruthenium HX) or # 2380 (Laser Platinum). The VG30 cams will add a little horsepower compared to the VG33E cams, but you will sacrifice some torque, which is usually more beneficial for a somewhat under-powered engine in a full-framed truck. Also, comparing the VG33E to a VQ40DE is apples to oranges. The difference in technology is night and day between the two engines.
While I'm usually skeptical about aftermarket CAI systems, the VG33ER is an exception. Even a basic K&N system with a heat shield is better than the factory filter box and resonators that Nissan designed. So, if you are looking for more power: CAI system, 2.4 or 2.3 supercharger pulley with colder plugs (stick with NGK when it comes to plugs and wires and Nissan for cap & rotor), and upgrade the exhaust. You can add about 3-degrees of timing advance over the stock spec usually without any issues, but back it off if you do happen to hear a ping. Make sure the knock sensor is working okay. Make sure the boost solenoid and actuator are working okay and double-check the vacuum hose for cracks and proper routing. Always used premium fuel! Otherwise, I would call it a day unless you want to dump a whole lot of time and money into this engine!
► Show Full Signature
Retired (2003), 16-year, former Nissan/ASE Master Tech. Administrator at TheNissanPath.com and Moderator at NissanForums.com. Registered member of ClubFrontier.org and NissanHelp.com. 2003 Nissan Frontier SVE 4x4 King Cab, VG33ER, AT. Also, 2006 Pathfinder LE AWD and 2008 Pathfinder SE 4x4.

Joined Apr 5, 2014
·
660 Posts
I think what i meant was the Boost Bypass Valve instead of WasteGate.

I've seen on different versions of the same model of Eaton M62 SuperCharger that 20 PSI is the absolute max and probably still too much but at around 16-18 PSI is the sweet spot without trashing the Snout on a regular basis but this was for the Eaton M62 on a Pontiac. I think the Frontier uses Version 2 or 3 of the M62 and the info i had seen for the Pontiac was on the next Version (Version 3 or 4 of the M62). Later versions may allow for more PSI tho. No idea tho, and i've seen multiple reports of the 2.3 trashing the Snout on the Frontier. Could be from improper rebuilding of the snout. Who knows.
► Show Full Signature
2000 Frontier SE CC Short Bed 4x4 3" Body Lift 3'' SL
Tires: 285/75/R16 (33's)

TxDayTrader said:
I think what i meant was the Boost Bypass Valve instead of WasteGate.

I've seen on different versions of the same model of Eaton M62 SuperCharger that 20 PSI is the absolute max and probably still too much but at around 16-18 PSI is the sweet spot without trashing the Snout on a regular basis but this was for the Eaton M62 on a Pontiac. I think the Frontier uses Version 2 or 3 of the M62 and the info i had seen for the Pontiac was on the next Version (Version 3 or 4 of the M62). Later versions may allow for more PSI tho. No idea tho, and i've seen multiple reports of the 2.3 trashing the Snout on the Frontier. Could be from improper rebuilding of the snout. Who knows.
Click to expand...

The amount of boost is only changed by increasing or decreasing the speed of the blower, since the blower speed is directly driven by the engine crank. The supercharger is meant to be used when more power is needed and not to be run 100% of the time, which is what would happen if you bypassed the SCB valve control solenoid valve, which sends vacuum to the SCB valve actuator, which controls whether all of the intake air goes through the supercharger or intake air bypasses it. So, what would happen if you ran all of the intake air through the supercharger 100% of the time? Well, for starters, you would have to listen to the supercharger "whine" all of the time. The more you compress air, the hotter it gets, so the supercharger would get really hot all of the time and, add that you would be working the supercharger under load all of the time, eventually it'll shorten the life of the bearings drastically. Keep in mind the VG33ER does not have an intercooler. Also, if the throttle plate were to suddenly close at full boost, it would cause a surge which could badly damage the supercharger.
You're not going to see 20 PSI out of the M62 used on the VG33ER and if you do, it's not going to last long! Stock boost gets up to around 7 PSI, that using the 2.6 factory supercharger pulley. Drop to the 2.4 pulley, you'll see about 10 PSI and with the 2.3 pulley, you'll see 13-14 PSI. I've read the 2.4 pulley will add about 26 HP and the 2.3 pulley will add about 36 HP...but, I'll take that as hearsay because I don't recall ever seeing any dyno stats. The ignition timing should be retarded around 1 to 1.5 degrees for every pound of added boost over stock (along with using the colder spark plugs). If you plan to run the engine up to its 6000 RPM redline with the 2.3 pulley, you will exceed the 14,000 RPM limit of the supercharger (per Eaton) and may damage do damage to eat...and possibly the engine if it "eats" and of the broken supercharger parts. That's why I think the 2.4 is a safer bet.
Last but not least, we should keep in mind this can be done without doing anything to the ECM tuning, which is important because it's hard to find anyone that will do it, anymore (if you find somebody, let me know)! Jim Wolfe Technology used to do it "back in the day," but they won't do it, anymore. It's not a programmable ECM like our Gen 2's, unfortunately, so the chip has to be removed from the board and a chip with a new program would have to be soldered back in place.

Now, if you want to get crazy with an M90 and NOS:

None, yet
Joined 30 d ago
·
126 Posts
I kind of wish I had gotten a supercharged truck. having previously supercharged vehicles, I really enjoy them.
S

busemans said:
I kind of wish I had gotten a supercharged truck. having previously supercharged vehicles, I really enjoy them.
Click to expand...

None, yet
Joined 30 d ago
·
126 Posts
ha ha ha, that's true. I would be getting 9mpg instead of 15 in town with a super charged one so that is a good point.
1 - 11 of 11 Posts
Join the discussion
Continue with Facebook
Continue with Google
or sign up with email
Recommended Reading
Read More
Read More
About this Discussion
10 Replies
6 Participants
Last post:
busemans 10 d ago
Nissan Frontier Forum
Welcome to our Nissan Frontier Forum! A premier community to share your mods and builds. Chat with like-minded Frontier owners.
Full Forum Listing
Explore Our Forums
General Discussion Off Topic New Member Introductions 1st Gen Hangout Exterior Mods
Popular Communities